Memories as a teenager in the 70's growing up in London
In 1976 my sister Gina died - she was 11.
Chicago played 'if you leave me now'

and 10cc played at Hammersmith
1) This is a very interesting story about the preparations for an 'historic' concert of 'The Trout' in London. The Trout Quintet was the first chamber recital that I organized when I was the leader of one of the youth organizations in Stanmore (my home town in North West London). I was in the lower sixth form (the equivalent to 11th grade) and I was really involved in lots of extra curricular activities, mainly youth clubs. We organized meetings, trips, dances - among which we managed to get The Tremeloes:  to be our main attraction at a dance at a hall in central London to raise money for charity and it was a great success.

Getting back to the chamber evening, all the players were either from school or from our Youth Orchestra (of which I will be talking about in another story). The first half we played the Mozart clarinet quintet (I played the clarinet): and the second half was the Trout Quintet by Schubert and everything went wrong especially for the violinist who broke 2 strings in the 1st half and almost gave us a heart attack when during the interval he had to dash out to bring new ones and arrived back only just before I was about to announce a change in the programme - I was lucky to have in the audience a friend called Mark Smullen who was a professional baritone singer who had agreed to step in and sing for us, I loved his rendition of this . However, it wasn't necessary because Chris (the violinist rushed in restrung his fiddle and the second half went off without further a hitch - Mark sung the hippopotomas song as an encore.
2) This is the 2nd movement of the Vivaldi guitar concerto in D major - When I was in my last year of high school in London I took part in the school play 'A Midsummer Night's Dream' and I played the part of 'Egeus'. My big scene was when I had to speak to my daughter to try and beg her to obey her father. The background music for this section was this 2nd movement of the Vivaldi guitar concerto. To this day I remember those wonderful last days at school - rehearsing and performing the play and this great music brings it all alive for me once again!
3) In 1975 I was at this incredible concert: 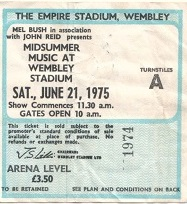 Midsummer music - Wembley Stadium 1975
4) I also saw Billy Joel live:
'Piano Man' by Billy Joel takes me back to the first few years following my arrival in Israel - Summer of 1982 to be exact.
In my free time I used to earn a bit of money by playing piano once or twice a week at a bar cafe in Gan Binyamin in the Hadar Neighbourhood of Haifa and one of the songs I learned especially was 'Piano Man'.
I had a close friend then (Eyal) who one day told me that his cousin (Philip} from Australia had come over and he wanted me to meet him.
The following evening I went over to his studio flat to meet his cousin and it was then that I met my future wife for the first time (Orit). At Eyal's flat there were 2 girls, Orit and her cousin from the US (Laurie) Orit was actually Philip's date for the evening and the idea was to pair me up with Laurie.
We decided to go out and as I could get a discount at the bar where I played, we went to the pub at Gan Binyamin.
Sitting at our table having ordered our coffees the four of us sat chatting about nothing and the only thing that was happening was that Orit and I were falling in love. There was electricity in the air ... a magnetism.
Orit and I hardly spoke and when we did it was trivial even banale - we put our hands palm down on the table and slowly but surely, not even looking at each other, our finger tips touched - it was like I had been struck by lightning and we remained like that for I don't know how long, neither of us wanting that magical moment to pass. The evening came to an end and Orit and I married 3 years later (and that is another piece of music altogether).
5) Those were crazy years before I came to Israel - the late 60's and seventies. Led Zeppelin for me are part of all that craziness and especially this song. The first time I heard Led Zeppelin was with David and that was when "Led Zeppelin II" -  'Whole Lotta Love' came out.
We were in our teens and decided to go to our first real rock concert. It was at Alexandra Palace in London and we managed to get tickets in the front section not too far away from the stage. On both sides of the stage were gigantic speaker stacks to which we were way too close and only realised just how close we were when they started to play. To say that it blew us away doesn't even get close to it - I thought I had permanently damaged my hearing and literally couldn't hear for about 10 days after the concert. I must admit that now, looking back on the experience, I think I could have well done without it altogether, but I can say that I saw Led Zeppelin live in concert - and not everyone can do that!
I saw the Carpenters LIVE:
AND
The Beatles at the BBC: In the top left of this picture is my Uncle Martin who worked at the BBC and with the 'Fab Four': 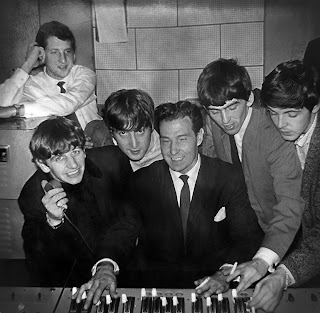 I was at this concert!! In 1977 the year before I came to Israel. I had my pale blue Ford Capri and a group of friends all piled into her and we went to see Neil Diamond at Woburn Abbey. We sat on the grass among thousands of other young people - the atmosphere was amazing.
Here are some other concerts I was at and will never forget: A group of 6 to eight of us would go as regularly as possible to Ronnie Scott's jazz club in Soho where we saw some of the greatest names in jazz - among them Dizzie Gillespie, Art Blakey, Thelonius Monk, Sonny Stitt, Count Basie, Duke Ellington, Woody Herman, Ronnie Scott and Buddy Rich (a few times) I also saw Frank Sinatra at the Royal Festival Hall in September 1978 (2 months before leaving England for good): 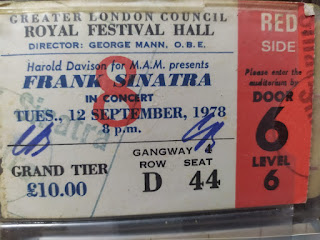 and Sammy Davis at the palladium:

6)
Between 1975 and 1978 I was living in the students residence of Goldsmith College - one of the colleges of London University - studying for a Bed. It was a great time, the studies were good and I had a full student life at the college being involved with student societies and different activities including parachuting and politics. At the residence one rainy Friday evening all the students had crammed into the lounge to see the live concert of Ralph McTell on TV. Half way through the concert one of the girls (Theresa) got up and left the lounge and minutes later came back with someone else. We didn't take much notice of the newcomer until the concert had ended when we turned on the lights and discovered that sitting with us in our lounge in New Cross, Sth London was Ralph McTell in person. It turned out that he was Theresa's cousin and that she had been planning this surprise for some time. He played and sang for us for a couple of hours - it was an incredible experience!!
7) In 1979 I finished the Ulpan in Jerusalem and travelled with my then girlfriend Debbie to LA and West Coast USA. When we went to Disneyland there was a performance of the great jazz drummer Louie Bellson with his band and the trumpet soloist Bobby Shew:
On Sunday 4th October 2015 while I was on a short family visit to London I went to Ronnie Scott's Jazz Club to see Bobby Shew play once again. I grabbed the opportunity to go up to him in the break at the bar and when I told him that I saw him play 35 years ago in LA he was excited and agreed to a selfie together: 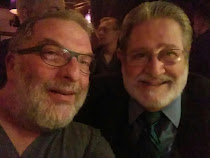 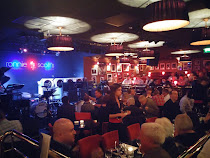 DRESS CODE: Please note that we operate a relaxed dress code at Ronnie Scott's, any attire is acceptable except for Flip-Flops and Shorts.